Program on Good Governance and Political Reform in the Arab World, Center on Democracy, Stanford University

The Program on Good Governance and Political Reform in the Arab World at the Center on Democracy, Development, and the Rule of Law at Stanford University examines the different social and political dynamics within Arab countries and the evolution of their political systems, focusing on the prospects, conditions, and possible pathways for political reform in the region.

This multidisciplinary program brings together both scholars and practitioners-from the policy making, civil society, NGO (non-government organization), media, and political communities-as well as other actors of diverse backgrounds from the Arab world, to consider how democratization and more responsive and accountable governance might be achieved, as a general challenge for the region and within specific Arab countries.
Website: http://arabreform.stanford.edu/ 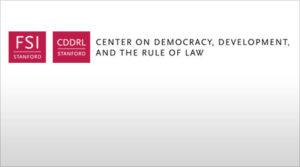