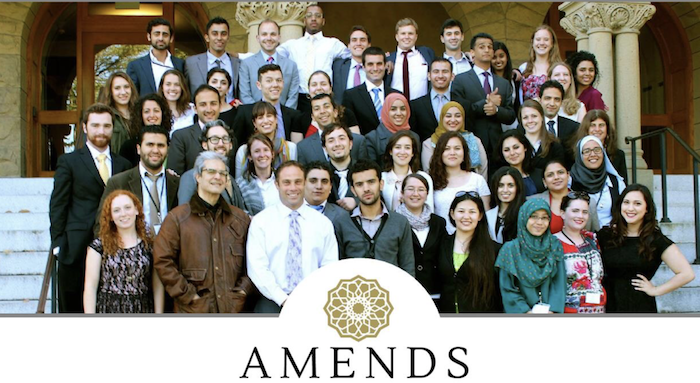 AMENDS has accomplished extraordinary things since its inception. Its mentorship and collaboration has nurtured a new generation of leaders, and its extensive regional network of alumni has helped incubate bold social and economic initiatives.  As someone involved in AMENDS since its founding a decade ago, this gives me immense pride, for these achievements are impressive.

Today, I want to take a step back and provide you with something different, yet intimately related – some important context and backdrop to what is at stake. I provide this as not only a political scientist, but also a practitioner who has lived through enough historical events to provide perspective and reflections.

This context begins decades ago.  The 1950s saw the rise of pan-Arabism, an ideology that sought to unite Middle East societies and Arabs together for common causes. This was not a discourse of populism, however.  Pan-Arabism was built on a cult of leadership, usually in the guise of military dictators or nationalist presidents, commanding absolute obedience in return for the promise of emancipation.

Yet as we know, promised victories never materialized.  Crowds filled the streets of many cities, from Casablanca and Cairo to Amman and Kuwait, but this did not prevent defeats.  Nor did this prevent conflicts between Arab states from exploding, including the divide between republics and monarchies.

In the 1990s, with fall of Communism, the emotive sense of pan-Arab unity enjoyed a brief renaissance. A new generation became exposed to a regional media and cultural sphere, as embodied by new media like Al-Jazeera and later the Internet. As a new wave of mobilization unfolded, the issue of Palestine remained at the heart of the Middle East.  In the West, this renewed sense of Arabness was relayed by an elite diaspora speaking from academia who did intellectual battle with neo-conservatives.

This renewed pan-Arabism enveloped societies but without state involvement. It was not directed by leaders, but instead diffused at the grass-roots level.  However, it had the same birth defect.  It did not focus on citizenship, and it excluded many minorities such as Berbers, Jews, Christians, and Kurds as equal stakeholders in this project.  And then came the fall.  If the Lebanon War was the apex of this new pan-Arab revival, then its decline began with the invasion of Iraq.  By then, we saw a new cleavage appearing within and across societies – Sunnis against Shi‘a.

Iran’s entry into the geopolitical game signaled the start of a new Arab civil war that still rages across the region, and which pits Sunni protagonists against Shi‘a protagonists. This resurgence of sectarianism has marginalized the Israeli-Palestinian conflict, removing it from the strategic equation and undermining its centrality to Arab discourse.

However, there was a critical juncture in this narrative.  The Arab Spring marked the end of pan-Arabism and the birth of a new discourse.  This is where you, and your young generation, has entered into the story as forward-thinking citizens.  During the Arab Spring, everyday youths such as yourselves revolted – not against foreign actors like the West, or against sectarian targets like Iran, but rather against national governments who were seen as barriers to dignity and freedom, which were inspired by universalism.

To combat this, these governments introduced counter-discourses of patriotism and nationalism.  They cloak their ruling imperatives today in the mantle of economic modernization and technocratic realities.  They have abandoned defending Palestinians.  At the level of the street, we have seen that societies that are fatigued with conflict and repression can react only under severe constraints to this total indifference to regional unity.

However, there is still a momentous opening here.  Whether we call it the Arab Spring or Arab Uprisings is a matter of debate, but this should not obscure the reality of this being a truly historical process.  It was not just a singular revolutionary moment, but a cultural expression of empowered citizenship.  This concept of empowered citizenship challenges the chauvinistic and close-minded vision of political order given to us by governments, and instead calls for unity across sectarian and geopolitical cleavages.

This also is a democratic discourse, for it suggests that all people are fundamentally equal and free.  It means that everyday people, especially youths, drive social and political outcomes. It is not pan-Arabist, but rather pan-regional.  It thus means that empowered citizens include not just Arabs and Muslims, but all peoples in the Middle East. This includes freedom-loving Israelis.  We welcome Israeli citizens because they can be equal partners in rebuilding the region, as they uphold as we all do universal conceptions of human rights.  We do not embrace them opportunistically to settle geopolitical scores, or to thwart the advancement of people politics and self-determination.

Pluralism and tolerance are not punchlines.  We cannot promote these principles and throw our critics in jail. In the same way, we cannot reify the rights of one party while trampling upon those of the other, as recognized by international law.  This is the apex of double-discourse.

This outlook you represent is the alternative for the region.  It rejects the fake and shallow solutions imposed upon us from above, and instead nourishes genuine movement from below.  This road to progress requires citizenship, effort, and reflection.  It is a long road, but we are taking it together.

AMENDS is achieving this through dialogue and empowerment.  Today, we see the fruits of its labor, including civic initiatives dedicated to the most vulnerable members of society, and self-sustaining ventures to help communities and economies flourish.  After ten years of personal involvement, it is an honor for me to work with like-minded people like yourselves in this direction.  I see AMENDS continuing to help incubate new ideas and projects, and create new alliances that will multiply the ultimate effect.