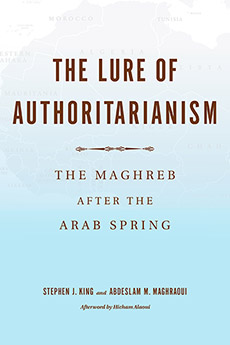 The Lure of Authoritarianism. The Maghreb after the Arab Spring

Conference and book launch at the Center for Contemporary Arab Studies and the Government Department at Georgetown University, Thursday, April, 25th, 2019.

The Lure of Authoritarianism. The Maghreb after the Arab Spring. Afterword by Hicham Alaoui, edited by Stephen J. King and Abdeslam M. Maghraoui

The works collected in The Lure of Authoritarianism consider the normative appeal of authoritarianism in light of the 2011 popular uprisings in the Middle East. Despite what seemed to be a popular revolution in favor of more democratic politics, there has instead been a slide back toward authoritarian regimes that merely gesture toward notions of democracy. In the chaos that followed the Arab Spring, societies were lured by the prospect of strong leaders with firm guiding hands. The shift toward normalizing these regimes seems sudden, but the works collected in this volume document a gradual shift toward support for authoritarianism over democracy that stretches back decades in North Africa.

Programme of the Conference: 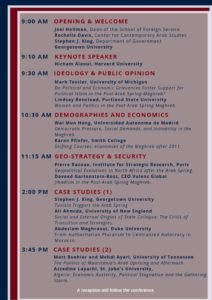