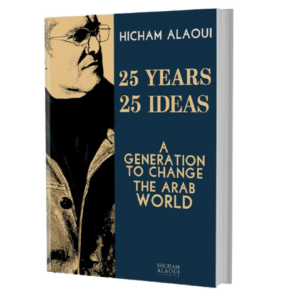 I am pleased to present my new book, 25 Years, 25 Ideas: A Generation to Change the Arab World.  The volume is a compilation of the essays and articles that I wrote for Le Monde Diplomatique from 1995 to 2020.  The anthology is being simultaneously printed and made digitally available in three languages (French, Spanish, and English), with the Arabic edition to be released shortly.  The digital version is free, for which I must thank Le Monde Diplomatique in sharing the copyright.  It can be downloaded at the following website: www.25ideas.net.

For the past quarter-century, Le Monde Diplomatique has been an intellectual home for me.  While I have published other works in academic venues and public media, my connection to this French monthly magazine of international record is a special one.  Its pages have hosted my thoughts and opinions about critical issues concerning the communities with which I belong – the Moroccan nation, the social tapestry of North Africa, and most broadly the Arab world.  The process began in 1995 with the publication of my first essay, “Being a Citizen in the Arab World,” and followed a year later by an article on Morocco’s alternance, “The Moroccan Monarchy, Tempted by Reform.”

What has come since have been nearly two dozen other expositions reflecting on the crucial events of our time, such as the passing of King Hassan II, the 9/11 terrorist attacks, the May 2003 bombings in Casablanca, the Iraq War, and the Arab Spring.  Running throughout these meditations is a deep, personal commitment to freedom, democracy, reform, equality, dignity, and human rights.  My intellectual treatment also considers different political, social and economic perspectives, and maps out the varied roles played by governing regimes, national and international institutions, civil society, and foreign powers.

In many ways, the ideas percolating throughout this book echo the ideals of my own generation – we, in the Arab world, who came of age in the latter part of the twentieth century.  Among those ideals is a moral affinity to transcend authoritarianism and achieve democracy.  We have not yet attained this goal perfectly, but this does not mean we have failed.  On the contrary, our work has helped expose political and economic deficiencies in the status quo, and solidified our shared conviction about the necessity of reform.  Now, the reigns of this struggle pass onto a new generation, which similarly seeks to join the ranks of democratic nations on the pathway of progress.